For the benefit of those who weren’t able to be there (and for my own use later), I liveblogged John Urry’s talk at the ProPEL conference in Stirling on 10 May 2012. 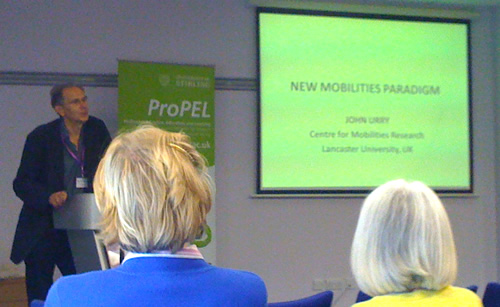 John’s work has been about trying to mobilise the social sciences and develop a mobilities turn, to draw out how so many aspects of social life presuppose intermittent mobilities.

However, some of the empirical processes involved are problematic – will mobility as we understand it continue forever, or is it of a specific moment?

Tolstoy on “other contrivances” for transporting people – but “never able to commit anything but evil” in the process.

In 1800 people people in the US travelled 50 metres a day, by foot, horse and carriage. Now they travel 50km a day, mostly by car and air. But distance does not necessarily = time – a bit more than an hour a day gets you further than it used to.

World citizens move 23 billion km each year. This may quadruple by 2050.

How did this come about?

1839-41 – new and interdependent systems came into play, mainly in England and Scotland: telegram; national post; first railway age; first package tour (Thomas Cook); first Baedeker guide; first scheduled ocean steamship service; invention of photography. Forms of mass movement – not just technical, but coming together in a system. Systemness is particularly striking. A shift in the way in which environments were understood and experiences as land –> landscape (influenced by the tourist gaze).

The pleasures and uses of movement are interestingly interlinked.

1. all social relationships involve diverse ‘connections’, some at a distance.

5. many kinds of social practices that presuppose movement.

6. distance generates many problems for the sovereignty of states (groups on the move are particularly problematic)

7. part of what produces the heterogeneity of social life are material objects

8. crucial to these is the idea of affordances

9. the significance of systems for organising mobilities

10. mobility-systems are organised around processes that circulate people, objects and information at various spatial ranges and speeds

11. these various mobility-systems and routeways linger over time (canals)

12. mobility-systems are based on increasingly expert forms of knowledge

13. mobilities presuppose ‘immobilities’. Some people have to be immobile so other people can move around.

See journal “Mobilities” for examples of taking up and elaborations of these characteristics.

Social networks are accomplishments, in process, weaving together material and social.

People are traveling further to accomplish their meetings.

The greater the distances traveled, the longer the meetings will last.

Overall, “friendship miles” “family miles” “business miles” and so on become necessary in order to be a *good* social actor. These set up really strong obligations – “the gift of travel time” that shows your commitment to the people/group in question.

Zygmunt Bauman: “Mobility climbs to the rank of the uppermost among coveted values” – stratifying factor (Liquid Modernity) –> leads to the concept of “Network Capital” (Urry). In order to be good at networking, that presupposes an array of material and other resources, people to visit, movement capacities, ability to locate information, meeting places (including places en route), communication devices, time to manage and co-ordinate (especially when things go wrong). There is a large array of mobilities (many modalities) – much more complicated than govt statistics (business vs leisure) would indicate.

So: what are the future challenges for mobilities? 3 issues: Oil; climate change; China. These issues will be transformative of mobility systems.

OIL: Almost all mobility systems are dependent on one resource. 95% of transportation energy is oil-based. “almost free” resource transformed the US. Oil uniquely makes possible our mobilities. It also has made possible the movement of goods and the manufacture of goods (including food); heating. And it is running out. Continued growth of mobility processes becomes much more complicated.

But is a reversal underway? A modest decline in US vehicle miles travelled in 2008. “Peak travel” – long term continued increase in scale and rate of movement may not continue forever. Are lots of things peaking? eg: young people in western countries are less likely than previously to have a driving license or own a car.

James Lovelock: “So is our civilisation doomed, and will this century mark its end with a massive decline in population, leaving a few survivors in a torrid society ruled by warlords on a hostile and disabled planet?” (will it be like Mad Max 2?)

A remark: If US citizens wouldn’t buy so many military style vehicles, the wouldn’t depend on oil imports… why do people want to drive these things? John: the US system has been characterised (by George Bush) as ‘addicted’ to a particular lifestyle. Disagrees that oil import would be eliminated in this way, though. But the data about young people is interesting – this is not their ambition – maybe a tipping point. But in China the tipping point is going the other way – large vehicles are particularly desired.

Question: Latour discussed how geologists have named our time ‘anthropocene’ – instead of being concerned with the post-human, we should be concerned with post-nature. What implications does this have for our research strategies? John: originally this term was to do with the use and extraction of fossil fuels. The significance of energy for social thought and theory has not been explored enough (but special issue of Theory, Culture and Society addressess this). The rise of the west was dependent on fuel – ‘societies beyond oil’ – we need to think about what comes after… maybe it’s nothing.

I was due to present a paper at the recent Networked Learning conference in Maastricht – one of my favourite conferences! – but unfortunately at the last minute wasn’t able to attend. However, the paper is available on the conference site, so I thought I would link to it. It’s based on the conclusion of my PhD thesis, and is about how we might think about reflective practices in a specifically digital context. It introduces the idea of the ‘spectacle’ and the ‘placeholder’ as useful concepts for reflection’s digital futures. I really want to do more work in this area, so this is definitely a future research direction for me. I’d like to hear from others who are interested in theorising digital reflective practices. 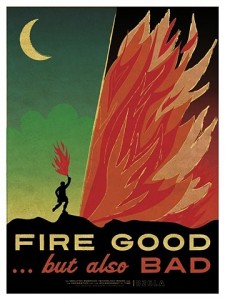 It’s going to be a busy year of research! The main thing is that I am finishing writing up my PhD this year, and will be submitting at the end of August. I’ll post up some bits and pieces as I go.

My paper, Traces of self: online reflective practices and performances in higher education, has just been published in Teaching in Higher Education, 16/1. The issue’s table of contents is online.

I have a chapter appearing in the forthcoming edited collection, Exploring the Theory, Pedagogy and Practice of Networked Learning. It’s being published by Springer in 2011, edited by Lone Dirckinck-Holmfeld, Vivien Hodgson and David McConnell.

The “student writing: innovative online strategies for assessment and feedback” proejct is finishing up in May and, along with a manifesto, the team will be writing a couple of papers for publication over the next few months, drawing on the data produced by a series of student-generated virtual ethnographies of courses on the MSc in E-learning programme.

The digital futures of cultural heritage education project has two workshops this year, in March and June, and those should be a really interesting extension of the excellent open seminar held in October.

E-learning and Digital Cultures was a 12-week course taught by me and Siân Bayne as part of the MSc in E-learning programme. It was innovative for the programme because of the nature of its engagement with digital cultures: it was open-access and disaggregated (you can see for yourself by browsing the web site), and made use of blogs, lifestreaming, twitter and a range of social and user-generated tools from across the web.

We’ll be presenting a paper at the Academic Identities for the 21st Century conference at Strathclyde University in June called “Posthuman academic identities in digital environments”, drawing on Siân’s recent work on uncanny digital pedagogies to talk about some of what we’ve learned from this course: how to work productively with volatility, disorientation, and strangeness. I’ll be giving at talk at the Society for Research into Higher Education conference on Wednesday 9 December called Reflective practices as masks: a new way to think about reflection in higher education

Summary: This paper discusses ongoing research into how students and teachers negotiate issues of identity, authenticity, ownership, privacy and performativity in high-stakes online reflection in higher education. I define high-stakes reflection as reflection which is summatively assessed or has a gatekeeping function into a profession, and use a metaphor of the mask to draw out different aspects of high-stakes reflection online: performance, disguise, protection, transformation, discipline and trace. Conceiving of online reflective practices in these mutiple and overlapping ways has implications for how educators understand and support reflection, and the expectations we place on our students in terms of what high-stakes reflective writing can and should accomplish. These practices should support development of academic or professional identity and voice through explicit engagement with matters of authenticity, power, narrative, subjectivity and agency – not through a discourse which frames the recording and improvement of the “true self” as the ultimate goal of reflective practice.

I’ll be giving a longer talk on similar themes at the University of Glasgow’s Learning and Teaching Centre’s seminar series, on Wednesday 13 January 2010. I will have time at this second event to share more of the data that’s emerging from my PhD research.

I’m looking forward to giving a short talk at the first seminar in the ESRC funded Literacy in the Digital University series – http://literacyinthedigitaluniversity.blogspot.com/2009/09/seminar-1-programme.html . The title of my talk is “Personal, professional and academic voices in online reflection: new literacies for new media practices”. I’ll post up slides or something as soon as they’re available!